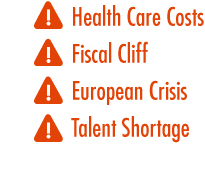 Uncertain about any of these issues??? →

On January 15th, MEA will hold a complimentary event releasing its 2013 Business Trends Survey. You will also hear the views of a nationally recognized economist about what to expect in 2013.

Over 1600 mid-sized companies from across the country were polled by MEA and other employers’ associations. Come hear the results of the survey including sentiments around growth, hiring, and compensation. You will also hear that the biggest perceived risk to growth is economic uncertainty. Businesses have been battered by a sluggish economy and worries about the fiscal cliff. But despite the New Year’s Day agreement, has anything really changed?

MEA is pleased to have noted economist, Joel Naroff, who will give his predictions for 2013, and answer your questions. Joel has been featured in numerous local and national radio and TV shows including CNBC, ABC, CBS, and NPR. In his eyes, we are poised for growth, and the only thing to be uncertain about is Washington itself. Join us to hear why.