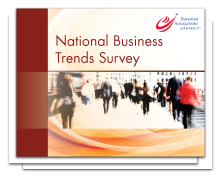 January 15, King of Prussia, Pa. – Results from a regional business trends survey show 66% of employers in the MidAtlantic region believe their organizations will see an increase in sales/revenue in 2013 as compared to 2012.  The 2013 Business Trends Survey, conducted by the Employer Associations of America, included regional results among members of the MidAtlantic Employers’ Association (MEA).  This survey included responses from almost 1,600 mid-sized businesses (those with fewer than 1,000 employees), including 237 from the Northeast Region.

“Overall, mid-sized companies in our region  are cautiously optimistic about their growth and new hiring for 2013 with more than 87% planning to increase or maintain staffing levels,” according to Kevin Robins, CEO of MEA, a member-based association that supports the workforce related needs of  mid-sized businesses in Pennsylvania, New Jersey and Delaware.

Noted national and regional economist Joel Naroff, of Naroff Economic Advisors, joined MEA at an event announcing the results of the survey.  Naroff commented that the U.S. economy showed some real momentum at the end of 2012 as consumer spending on just about everything including motor vehicles was solid.  Moreover, the housing market is turning around and construction is picking up.  Europe is starting to stabilize and Asia seems to have turned the corner.  The only remaining uncertainty is the debate over the debt ceiling and spending cuts.

According to Mr. Naroff, “Between the already passed tax increases and additional increases coming from likely tax code changes as well as inevitable spending cuts, the resulting “fiscal drag” is the one hurdle left for the economy to clear.  This could slow the recovery this year but once the spending cut agreement is made, businesses will be able to spend the nearly $3 trillion they have in liquid assets.  Thus, we should see solid economic growth by the second half of the year with activity accelerating into 2014.”

Mid-sized companies in the MidAtlantic region identified the following as the most difficult positions to fill or retain:  professional staff (39%), skilled production workers (30%), and high potential middle managers (29%).  These regional trends correspond to the national trends.  The survey also identified the following strategies to address these shortages:  additional training and development for existing staff (49%), filling jobs with existing staff that lack necessary job skills but have potential (42%), and increased focus on retention where recruitment is difficult (35%).

Mr. Robins commented, “Over the past 9 – 12 months, MEA has seen an increase in training and development across its Members in line with the Survey results.”

The Survey also identified that the most significant impediment to growth and hiring forecasts is economic uncertainty.  38% of the businesses in the region identified that as the greatest barrier to business growth which mirrors the national forecast.

Highlights from Employers in the MidAtlantic Region

66% of employers in the MidAtlantic region plan to hire in the 1st or 2nd quarters of 2013.

In 2013, 49% of area employers are planning process improvement initiatives and 29% plan to shift a larger percentage of healthcare costs to employees.

Highlights from the National Survey

An impressive 87% of the executives surveyed report that 2012 was about the same or better when compared to 2011. In contrast, their optimism for 2013 seems to have tapered as 79% of the executives surveyed expect the outlook for the overall 2013 economy to be about the same or better compared to 2012 – down from 90% last year.

This decreasing optimism likely reflects the turbulent economic and political environment of the fourth quarter of 2012. Employers struggled with business planning given a sea of unknowns ranging from the presidential and state elections, health care reform to the ominous Fiscal Cliff.

Despite their more guarded response to the economic outlook, employers remain self-confident. “We see an interesting contradiction in the survey responses. While employers indicate a less jubilant perspective for the 2013 economy, their actions speak louder than words. While only 30% anticipate the overall 2013 economy will be better than 2012; 61% of business executives expect increases in their own sales/revenue,” says Jerry Bumgarner, a representative from the Employer Associations of America (EAA) survey research committee. This self-confidence is demonstrated in their optimistic business plans for 2013.

2013 compensation strategies demonstrate employer confidence as well. 66% of the respondents reported plans to award wage/salary increases in 2013, 35% are planning to award variable/bonus awards, and 9% will give lump sum awards during the year. A minority of the organizations surveyed (13%), plan to freeze or reduce pay – down from the actual 23% that froze or reduced pay as cost-cutting measures in 2012.

Another mark of employer confidence is an increase in staff. 34% of the respondents plan to hire additional staff, with most of those expected during the first half of 2013. These results are similar to the past several years.

Economy Still Cause for Concern

About EEA and MEA

The Employer Associations of America (EAA) consists of 37 regional employer associations that serve 48,000 companies and over 5,600,000 employees.  The EAA’s mission is to advance a national presence as well as the regional success of its members through collaboration, efficiency, and shared knowledge and resources.

The MidAtlantic Employers’ Association (MEA) is dedicated to  helping private growing businesses in the region to leverage their internal resources so they can maximize the performance of their employees and organization without a significant investment.