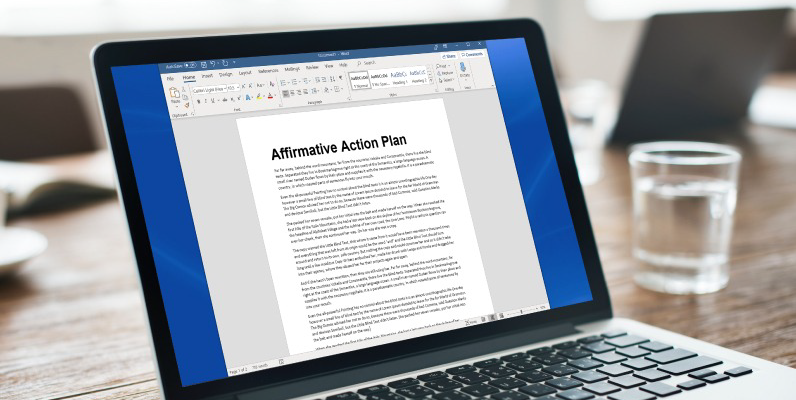 What is an Affirmative Action Plan and Do I Need One?

Does your company need an Affirmative Action Plan?

Companies that meet the following criteria are covered by federal affirmative action obligations and must prepare an Affirmative Action Plan annually to comply with federal requirements:

Every company that meets these criteria must have an Affirmative Action Plan in place.

What is an Affirmative Action Plan?

An Affirmative Action Plan (“AAP”) is a written document or “program” outlining the steps a company has taken and will take to ensure equal employment opportunity. An AAP is prepared based on employment data for the previous year and looks forward to what steps the employer will take over the next year. For example, a company which, over the previous year, had fewer female applicants than are generally available in the eligible population, may be tasked with attempting to expand its pool of candidates by posting open positions on new job boards or participating in different or additional job fairs. Preparation of the plan involves analyzing employment data using regulatorily required statistical analysis, summarizing the results, and formulating a plan based on that analysis, and all of these steps must comport with federal requirements.

Employers covered by federal affirmative action obligations may also be required to establish certain policies (such as a transparency in pay policy) and to offer applicants and employees the chance to voluntarily self-identify their race, gender, or veteran status, among other things

What if a company has fewer than 50 employees or works on government contracts valued at less than $50,000?

On February 1, 2022, OFCCP officially launched the Contractor Portal, and covered federal contractors and subcontractors are now able to access and register their organization in the portal. Beginning March 31, 2022, federal contractors will be able to certify the status of their AAPs for each establishment and/or functional/business unit, as applicable. Through the Portal, covered federal contractors and subcontractors must certify, on an annual basis, whether they are meeting their requirement to develop and maintain annual AAPs. The Portal allows multiple users from individual organizations to register, manage records, and certify each establishment and/or functional/business unit, as applicable. Additional information regarding the Portal can be found here.

The Office of Federal Contract Compliance Programs (OFCCP) oversees compliance with affirmative action requirements. This oversight is most often exercised through compliance audits, which can escalate to on-site inspections.

Compliance reviews often begin with a standardized written request for submission of the company’s Affirmative Action Plans and supporting data. Following a “desk audit” of the plans, a review officer may come on-site to review additional company records and to interview company officials and employees.

If this on-site review reveals discrimination, the OFCCP may impose monetary penalties, among other consequences. Monetary penalties are imposed when the OFCCP finds issues of discriminatory policies and actions during the audit process. Such issues usually involve adverse impact in hiring, promotion, and termination of qualified minorities and women. Discriminatory compensation practices also are a focus of compliance reviews.

The penalties for failing to comply with federal contractor requirements can be severe. In addition to monetary penalties, non-compliant companies can have their federal contracts terminated, and they can be barred from receiving future government contract work.

If you have any questions about whether your company needs an Affirmative Action Plan or about government contractor compliance generally, please contact MEA’s Hotline.

Editor’s Note: This post was originally published in September of 2019 and has been updated for accuracy and comprehensiveness.